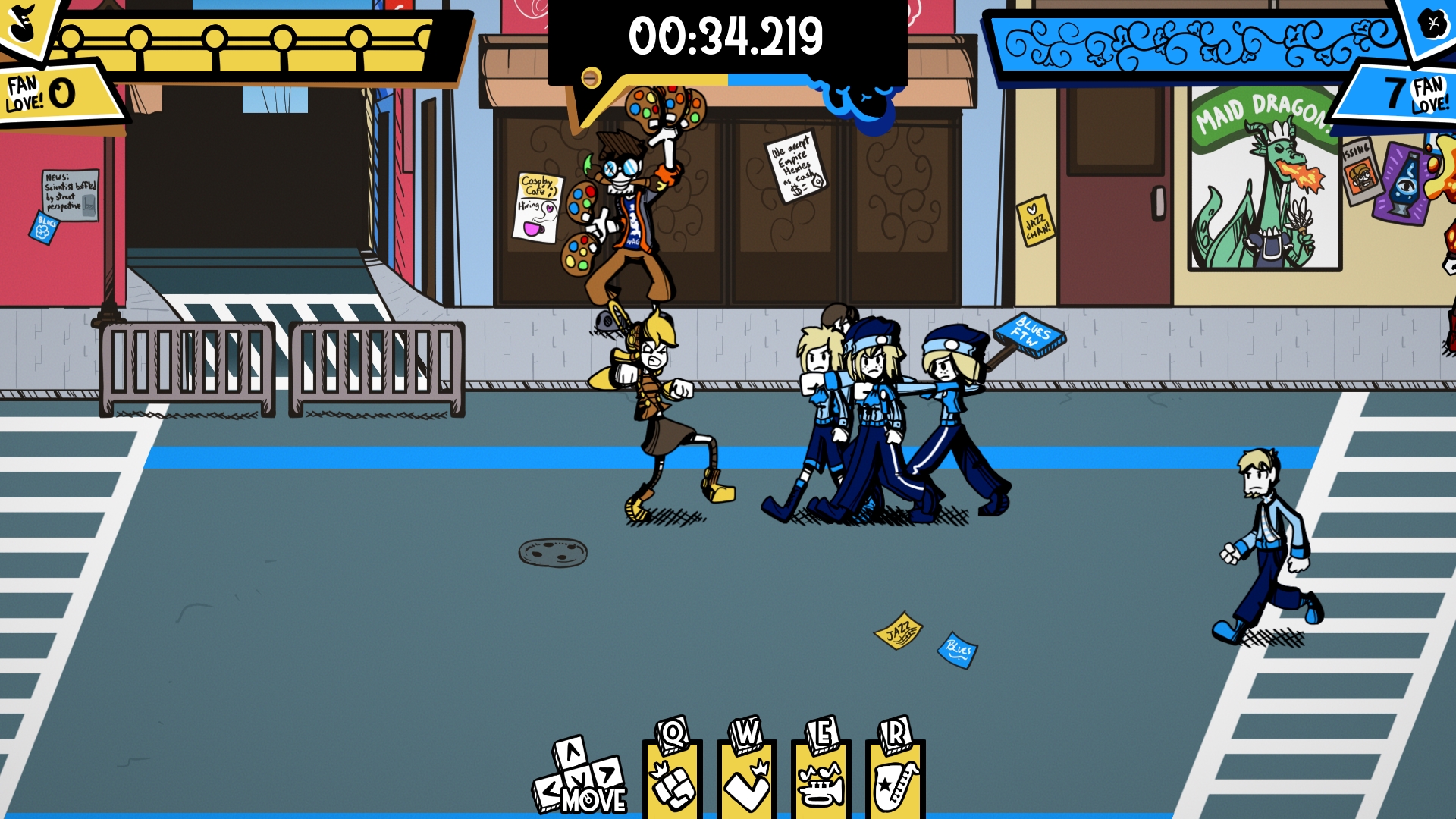 While we might have just released Super Sellout yesterday, for us it’s always important to look back on our previous entries and understand how things have changed since. It just so happens that today, last year, was the day we released our Ludum Dare 40 entry, Jazzy Beats!

Jazzy Beats is to us our most important Ludum Dare up to date. While we had already participated up to three times in prior editions, Ludum Dare 40 was the one that we definitely decided to pull of our best, and try to create something with tons-of-personality, and try to rate as much entries on the judging period as we could potentially allocate in our time period.

We ended up creating what some people ended up calling an indirect beat-em-up as your goal, being an idol, was to convert fans of an opposing idol into your own fans by, well… constantly hitting them as they converted-back-and-forth. Due to the scope of the game, it ended up teaching us a lot of about time-saving techniques in programming, art and event sound design! While we talked about making an expanded universe, characters, and a larger version of the game, we have still not have gotten around it, and if we get to it remains to be seen.

And of course, for the judging period, we ended up rating more than 100 games, making it our biggest ratings season yet!

It’s quite obvious that our latest game Super Sellout, is heavily inspired in Jazzy Beats. From the similar perspective in terms of art, to even the controls of it. Ideally we wanted to create a bigger-gap in terms of presentation between the two, but the two ended up sharing similar perspectives. Gameplay wise the movement systems shared many similarities, but applied to completely different game genres. If you notice closely you might even find some references to Jazzy Beats scattered around on Super Sellout! ?

While we definitely reapplied several of the lessons we learned through Jazzy Beats on our latest game, we also learned a lot of new lessons through Super Sellout as well, most namely, to managing and handling a bigger team with different skill levels. We’ll be sharing dedicated posts about that in the future as well,

Our personal goal right now is to give feedback and rate even more games than we did last time, and with the larger dedicated team, we hope to achieve that in the follow weeks! We wanted to make sure we can help as many people as we can with their games.

Our first day spreading the word about the game has been amazing so far, and we have already played some real gems! If we had to recommend some, we’d say Sacrificio Inc., Serial Dater, Identity Crisis and Medic!. We’re going to keep searching for more gems, and make sure we share them as we find them!

If you have a game you’d like to share around, then make sure to share it over at our Discord. A lot of Ludum Dareparticipants have already joined us there, and it’s be great fun if even more could join! Of course, if you like to be more shabby, you can also give us a follow on Twitter.

Whale on and sell yourselves out! ?