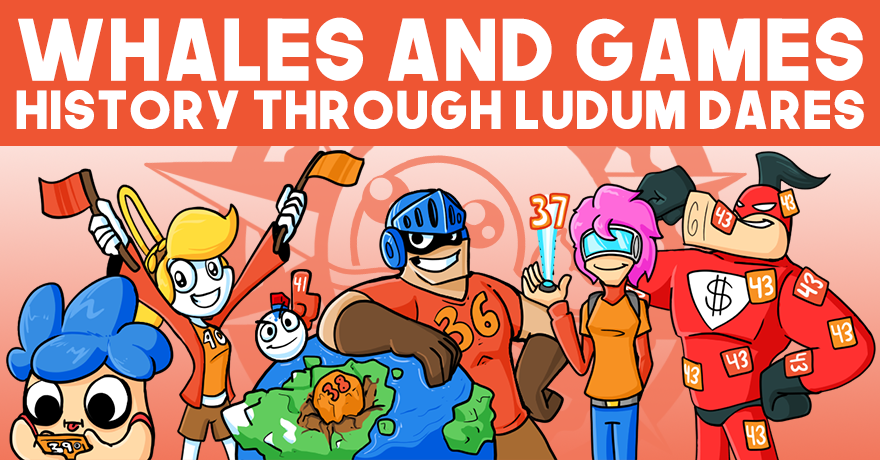 Whale of a Retrospective! Whales And Games History through Ludum Dares!

With the end of the year coming up, television and news sites are flooding with yearly retrospectives and the most marking events of the year, highlighting both the positives and negatives of the past months and what’s bound to be remember of this year for history.

With the end of judging for this Ludum Dare coming up, we thought to do something similar, only instead of it being just about the year, we’re looking at the history of our past Ludum Dare entries from our latest game Super Sellout all the way back to Colossorama! Sit comfortably on your chair  and prepare for the history of our Whales And Games team through Ludum Dare editions, how it shaped us, and what we learned from each edition respectively! Leggo! ??

If there’s a game that we have to thank for and which was the reason why our team exists nowdays, it is Colossorama. Created for Ludum Dare 36 (August 2016), Colossorama was a simple hack-and-slash sidescroller where you were forced to swap weapons every round to defeat as many enemies as you can while attempting to stay alive on your own.

Colossorama broke what was essentially a two-year-long creative-block towards games for me and Moski, and has since evolved tremendously receiving multiple updates since it’s original debut, being showcased in multiple events, and even gaining a following of its own. In fact, a third major expansion to it is planned to come out early next year, and we are already looking at some other plans we have ready in-mind for beyond that!

While we ocassionaly make the joke that it’s the game that should not-be-mentioned, Hyper Holomayhem taught us some hard lessons regarding how we should tackle future Ludum Dare editions after Ludum Dare 37 (December 2016). In essence, the game was also a side-scroller free-roaming shooter, where you’d have to tear-away levels by shooting at it’s tiles in order to collect gears that would power the room and regenerate again.

The game, while it obtained good judging scores, taught us a few things regarding how we should tackle scope and design decisions. Always make sure you come up with a pre-set idea as you come out of the brainstorming phase and make sure mechanics are well established so they can be quickly ironed out and improved during the jamming time. Unfortunately, there’s still some one or two-offs where we fall on the same trappings, but overall, it taught us a lot about how to handle things going forward.

With the hard-swallowed lessons from Hyper Holomayhem, our next entry, Petty Puny Planet for Ludum Dare 38 (April 2017) was a complete turnaround of what had happened during the previous game’s development, and, in the opinion of many of our team, might be our best take-away from Ludum Dare so far. Petty Puny Planet was a pick-your-own-adventure type of game where you’d pick different actions to determine a planet’s development, and be faced with random-consequence events that could undermine (or be undermined by) your previous choices.

Rather than teaching us harsh-lessons, Petty Puny Planet instead served as a confirmation of many things we had done right this time around. Keep the scope conformable and well-defined, allowing you to focus immediately on what’s important and establish mock-ups and mechanics so that the rest of the team is able to immediately know where the game is headed. Samurai Jack was also airing at the time, which probably helped the team mood a lot.

It’s also noteworthy that Ludum Dare 38 was the point we officially founded our team under the name Whales And Games which we’ve been using since! ?

JouleThief: Charge Your Phone is an odd-one-out when it comes to this retrospective, being the only game in this list that wasn’t originally planned as a Whales And Games title. Rather, the game was originally developed during Ludum Dare 39 (August 2017) as an attempt for Moski to work with a different team while other members of WAG were busy at the time. Taking the role as Joulethief, you’d go around attempting to charge your phone as much as possible while avoiding guards attempting to arrest you for disturbance.

The game noticeably has it’s own noticeable quirks, utilizing 3D physics in a 2D game and even featuring an unfinished level editor. Later on, Kroltan, the game’s programmer, would end up joining the Whales And Games team and has since collaborated with us on two other projects featured on this retrospective. After some recent internal talks, we have finally decided to crown JouleThief as being an official part of the Whales And Games collection and hope for one day to be able to put the game on the limelight it deserves!

Following the momentum and good spirits of the original team preserved since Petty Puny Planet, the next game to come out of the team would be Jazzy Beats, an indirect beat-em-up where you brawl against an opposing idol’s fans to convert them to your own, created during Ludum Dare 40 (December 2017).

The game extended on the lessons learned through a Petty Puny Planet, continuing on with the trend of defining the games vision right on the first hours, increasing the project’s scope to involve more mechanics, and allowing team members to experiment and implement their part directly on top of the project files (while previously, all the project setup on the engine side was made by the programmer).

Jazzy Beats was also noticeably our best performance in a judging phase as of yet, both in terms of how many games we’ve rated as well as how many ratings we have received. It has since become our staple goal of what we want to achieve with each consequent judging phase and edition.

With a new Whales And Games setup and the core team growing, the torch started being passed around the different team members depending on the occasion and availability of the team. The first project to test having different team members on the lead instead of the usual suspects happened with Wizsnooks during Ludum Dare 41 (April 2018). Mixing two incompatible genres, Wizsnooks was pool meets RPG, creating a pool game where you’d have to defeat enemies either using your gear or pushing them into pits.

Wizsnooks turned out to be a nice revelation, being surprisingly innovative with its mechanics mixing both the genres, making it one of the games we have considered giving a revamp too for the longest time, especially considered the different ways the game could be expanded. Overall, it served as a perfect example of the capability of the team to adapt to different team setups and how they can affect the ideas behind a specific game.

However, it still followed the typical three-people team formula we had been using during the previous jams, and that was something we wanted to break with the next edition.

After skipping Ludum Dare 42 as a team (not so much for Moski which had a catastrophic experience instead) we finally reach the current live edition with Super Sellout being developed for the current Ludum Dare 43. Super Selloutpitches a runner-game with having to sacrifice mobility and visibility by choosing sponsors as to achieve an higher highscore.

Super Sellout‘s development was somewhat similar to the development of Hyper Holomayhem, with it’s own sets of ups and downs, but at the same time, it was somewhat expected in advance. The jam was the first time we experimented with having most of the team (that’s five out of six people) in a single jam, rather than going with usual three-people model. In essence, it was a team exercise, and we have certainly gotten some good pointers about how to manage future editions and projects when they involve more people than usual.

While we could go into more detail regarding the lessons we learned, we still have our usual post-mortem coming up in the following days detailing both what went right and what feedback and experiment taught us.

And that wraps it up! While the judging of Super Sellout is still going on, it’s always a nice lesson to go back and retrospect through our history as a team and jammers, realizing the different lessons we learned throughout the different editions. We believe that the next jams will continue evolving us as a team as we tackle different genres and experiment with different ideas and as we keep refining our formula and identity.​ ?

As the year comes to a close, we have a bunch of new ideas and experiments we want to make, but we’re yet to see how our team evolves. From adopting a new roadmap, to attempting to build a more complete experience, we’re sure the time between this and the next edition of Ludum Dare is going to be surprising. It’s quite sad to see the event reduced to only two editions a year, but we’ve already got our scopes sighted for other events we’d love to join!

If you’d like to keep up and join us in the wild ride the next year is going to be, we totally recommend you to follow us on Twitter and join us on Discord where we’ve got an active community of developers, artists and even just traditional gaming peps. You’re also obviously free to share your Ludum Dare games over there! ?