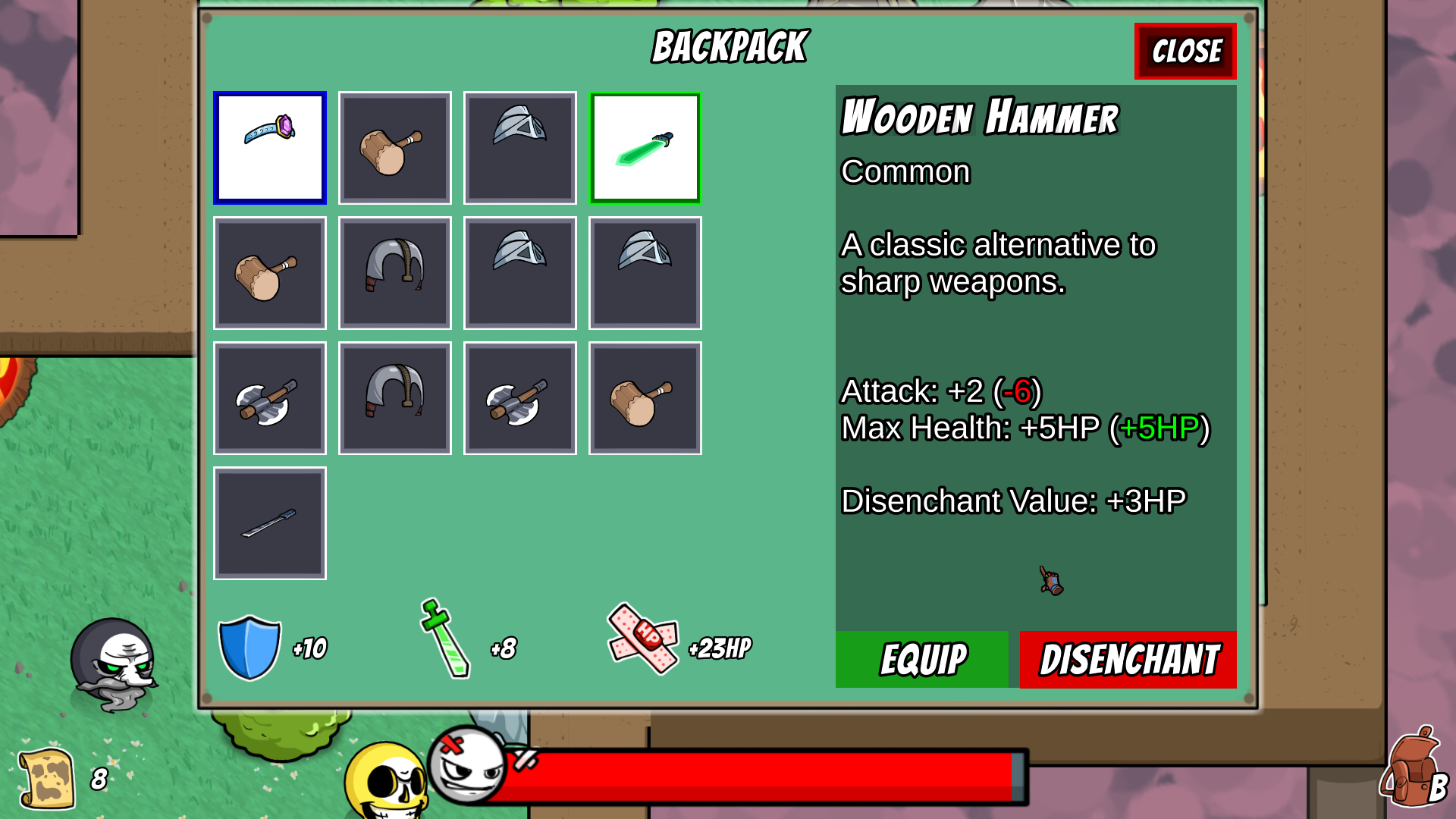 It’s time for the final sprint for Ludum Dare! It’s the last week, and people are going full-throttle commenting and rating! There are a lot of games with less than 20 ratings that deserve some more attention, so be sure to keep contributing to the community! Lots of people here have worked hard to make it through the crunch!

As for Wizsnooks, our loot-frenzy pool action game, we got a post-mortem ready for you. It took a bit longer than anticipated, but we’re still glad that we get to share this with you!

Wizsnooks is a roguelike loot pool hybrid where you clear tables with different layouts by defeating all of the enemies present on it. Enemies are defeated by attacking them with your white-ball, Snooks, or by pushing them against one of the lava-filled holes spread across the table. Once all the enemies are defeated on a table, the game will randomly pick the next one, filled with all new enemy balls to defeat.

When an enemy is defeated, the player is awarded a random piece of equipment of varying rarity which alters Snooksdefense and attacking stats, making it progressively easier to defeat more and harder enemies. Equipment can also be dischanted as to heal some of Snooks health and inventory prioritization is a must. However, no amount of equipment will save Snooks if they fall into a lava-filled hole!

Although we kept our same team formation (one programmer, one artist and one composer) for this Ludum Dare, this time-around, the team was mostly composed of members which have recently joined our team at Whales And Games , with the exception of Moski, returning as the game’s artist. Kroltan, which had previously participated with Moski on the creation of JouleThief: Charge Your Phone joined as the team’s programmer, and Robin, which had participated with us on previous Ludum Dare entries, such as Colossorama and Jazzy Beats returned as the game’s sole audio composer.

Wizsnooks was developed with a mix and match of programs which we normally use during our daily game development workflows, along with our vision and sweat. Some of these tools, as well as some of the plugins for each respective tool, that we used include the following:

Because of timezones and availability, not everyone on the team was present at the announcement of the theme. Shortly after the theme was announced, some members got into brainstorming, then one left and another came to further discuss more ideas.It wasn’t until about 12 hours after the theme’s announcement that the game’s concept of “Snooker but with roguelike elements and loot” finally materialized with everyone agreeing on it.

With pool mechanics in mind, the programmer was able to make snookers, enemies, and even random level progression (which some people have mistaken as procedurally generated levels). The musician delivered some of his best tracks to date, and the art was among the most cartoonish the artist has done. The team played to their best strengths and in the end, we were all satisfied with what Wizsnooks became.

The Best Parts of Development

Scope of the Project

The idea of Snooker+Action+Roguelike was accepted almost immediately by the whole team. It was initially created with themes of pool mixed with a medieval setting (which, later in development, was shifted to sorcery). Because of it, we were able to quickly debate about what to add, what to remove, and which direction to take the game to. Many ideas included bosses and enemies taking turns to attack, but we ended up heading on a direction on which skill and inventory management were more important than hoping to survive being thrown into a hole without the player’s input.

The project had it all. A core gameplay loop, attacking and healing mechanics, inventory, enemies, and many levels. Discussing a plan, grounding the possible ideas and dismissing those that would need a lot of tweaking or playtesting.Having a direction made it possible to polish the game, make it as little confusing as we could, and still manage to have a wide arrangement of loot and levels.

Our core team was composed of 3 people, with a few special mentions of a few others that assisted us with feedback, help with code and moral support. Because of the tools used, the group was able to stay communicated with each other, update the project almost seamlessly and discuss changes and directions. Overall, we all had something to do almost all the time.

Because some of us had the knowledge to work with Unity at the same time, towards the end of the jam, we were making many levels at the same time. While the artist kept preparing stuff for UI and the title screen, the musician was able to import weapon and helmet assets, which allowed to double the loot. Finally, the programmer was able to improve the overall gameplay of the game.

What Experience and Feedback Taught Us

The Physics Could Be Improved

Wizsnooks was made with Unity’s recently added tiling system, which allowed us to create a multitude of maps in little time. However, one of its core problems was that the game’s physics ended up not working as intended. Balls would lose a lot of momentum when touching each other, bounce in weird directions or bounce back when hitting a wall, displaying a weird feeling of friction at times, making it hard to tell where something will end before you hit the cue ball.

Likewise, we should also have given the players the ability to preview how their shot would behave, allowing them to navigate around much easier.

The Camera Shouldn’t Be an Obstacle

With so many levels, there should be a way to be able to look around before hitting the ball. Otherwise, when starting a new level, the player would need to do small hits to avoid hitting a dragon orb accidentally or falling into a lava pit by shooting somewhere without having knowledge of the level’s layout. A common suggestion we got through feedback was to allow the player to look around the map before taking a shot.

Closing Remarks. What Can We Improve On?

It’s been a fantastic experience to work as a team again this Ludum Dare. With Wizsnooks, we adhered to a simple idea and increased it with concepts that were within our grasp, which allowed us to deliver a polished and fun experience (sans a few rough edges) which is what Whales And Games always strives for when creating new projects.

Like many projects in the Ludum Dare, we’d love to see some post-jam enhanced edition of sorts. Pending availability of the team, we’ve discussed things that we’d like to add to Wizsnooks, a lot of which is based on the feedback we’ve gotten from the comments. Some of the changes that we’d make include:

Going forward, The Whales And Games team is planning on touching up some of our projects that we have previously shown around (such as on our Twitter wall). Since it’s a growing team, some of the members want to work on updating Wizsnooks, while others want to throw a few surprises in the coming months. There would be some extra touches here and there, and hopefully a few releases. We also want to start interacting more with players and better incorporate fan-feedback into our workflow. If you’d like to join us in this process, feel free to say ‘Hi!’ through our Discord server!

Making the post-mortem was an eye opener for us, and we hope that you can find this insightful as well. Doing an hybrid of snooker and roguelike was something that we couldn’t have even dreamed before the gamejam, and seeing it exist is just amazing. The team is proud of the project we made this time around and about the effort of not only us, but those that supported us from start to finish.

If you’re interested in checking it out, Wizsnooks, could welcome some last minute ratings. It’s been fantastic to once again participate with incredibly talented people at the Ludum Dare, and we’re hoping to stick around for some more in the future. We’ll be crossing fingers and hoping to see you all around! Cheers! ?