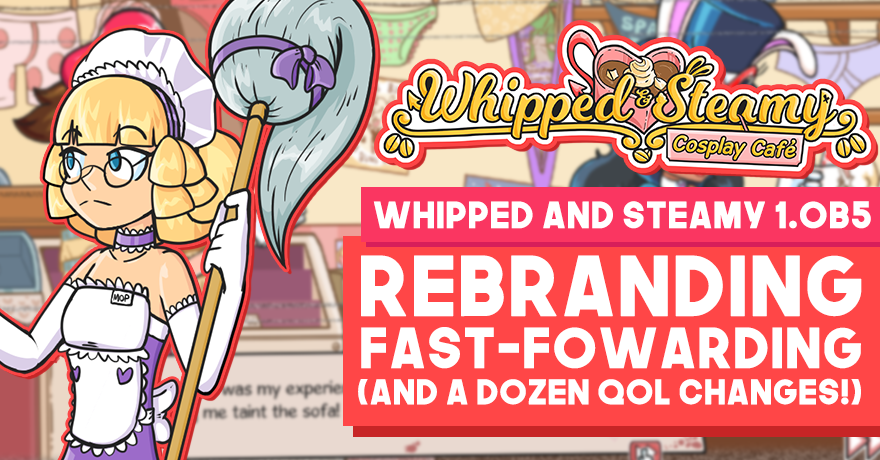 Rebranded and Refilled! Whipped and Steamy 1.0B5

It’s almost been a whole month since Cosplay Café launched to the world! Over the last weeks, we’ve gotten all sorts of feedback, reception, new community members and ideas for what we’d like to do next. Now, as we start considering and preparing for the future of the project, we wanted to get a few last up for the current version of Cosplay Café before we started moving forward.

As such, here’s version 1.0B5 with a bunch of polish and bug-fixing changes! However, most importantly, our biggest change is that we are re-naming the game and project from Cosplay Café to its new name of Whipped and Steamy • Cosplay Café.

Why change the name? And why now?

Cosplay Café has been the name of the game  since we’ve first sketched out the first ideas and goals for the project. Over time, and until we had the opportunity to finally develop it, we grew accustomed to the name Cosplay Café and decided to ship it with that name without thinking much about it. However, now that the game has been out for a while, we have realized that discoverability of the project isn’t exactly the best, as searches for the name will frequently take you to real-life restaurants and maid cafés rather than the game.

As such, changing to Whipped and Steamy • Cosplay Café not only keeps the old name for legacy purposes and clarification, but also gives the game more of its own independence and flavour as a standalone title. It also gives us a work bench for future updates and even other ideas that might pop up later. Whipped and Steamy is not just the Cosplay Café but a whole universe of its own.

Changing the name now also allows us to start preparing and telling the players about how the name for the game is changing, as well as assure that this 1.0 version doesn’t get lost with time for having a different name than the newer ones.

What else has changed?

With the name change in place, and all of the different bug-fixes and polishes we wanted to get out of the backlog for this version of the game, here’s the full changelog of version 1.0B5:

What happens with my saves?

If you’re playing the Desktop Version, the files from your old Cosplay Café save should automatically be transferred over to the new one. If they haven’t, don’t worry! You haven’t lost your progress! However, you will have to manually move the files from their old save location to their new one. You can do this by following our managing and backing-up save data guide.

If you’re playing the Web Version, unfortunately, save files end up being a bit unreliable, especially when we deploy new patches meaning you might have lost your data. However, with this version, we have also added a way for save data to be exported out of the web version, so that you can import it back at anytime even if we update the game. We recommend you always export your data after you’ve finished playing! You can know how through the same managing and backing-up save data guide.

We’re just getting started with Whipped and Steamy • Cosplay Café. While we have over a dozen games of our own now, all of our team has never fallen-in love with a universe and concept of our own so much, and we want to continue expanding it and adding-in new features and content to it overtime. We still have a few things that we need to take care off before we get our hands-in developing the first major update for the game, but when we do, it’s going to be a doozy!

Like always, we encourage you to come and join our Discord Server and discuss or talk about the brand new changes and what you think about them. If you have any sort of quality-of-life or content suggestions you’d like to see in one of those major updates, we’d love to know them!

On other news, our 2nd anniversary is coming up this weekend! We’ve got some slew of surprises and announcements ready, so make sure that you stick around for when celebrations come around! Cheers! 🐳