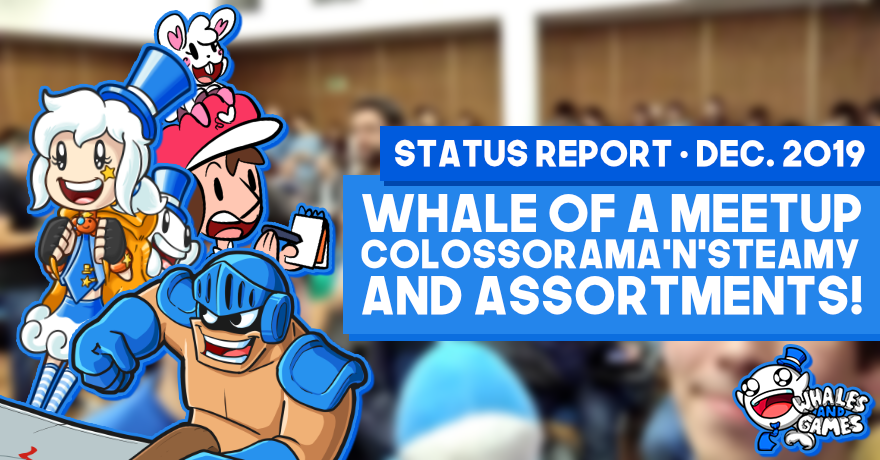 Whale of a Meetup, Colossorama’n’Steamy and Assortments! • Status Report – December 2019

Whale! It’s been quite a while since we’ve had a Whales And Games Status Report, hasn’t it? It’s been challenging to actually get one of these done lately but it’s time to get back on track and bring out a new freshly-fished December Status Report right before we close-off the year for good!

While you probably expect a ton of game-related news whenever we make one of these posts, ever since last August’s report things have certainly been a bit hectic with a variety of not-game-related tidbits of Whales And Games happening all over the place, hence the delay in getting around to actually write one of these again.

Strap onto your sea-horses because we’ve got a lot of small but very important milestones to cover! Let’s get into it!

A Whale of a Meetup and a Talk!

When we mentioned that we were extremely hyped for this year of Whales And Games we didn’t expect things to culminate with our co-founders meeting up in person for the first time in Portugal after seven-years of internet-friendship shenanigans!

Given how long we’ve worked together, it made for a very sentimental reunion which has started to change how we take-on WAG and our games going forward. Not only that, the meetup also happened immediately after one of us had just been relieved of their college duties and had just graduated!

To make things even more interesting, our meet-up was set up to align with our first public WAG talk at Game Dev Camp, Portugal’s highlight conference for game developers. Our talk was all about Whipped and Steamy • Cosplay Café and how we envisioned it to break the mould of adult games, refine our character’s writing further while developing it and how we fit everything into an ‘impossible deadline’. We ended up having a total of 70 people in the room, and a lot of them expressed to us how they found the talk really interesting! ✨

If you want to take a peek at the slides from the talk which are almost readable by themselves, you can download them here! If there’s enough interest for it, we might even make a full-fledged development insight covering the topics of the talk! 😊

This past month of November, we had the opportunity to showcase Colossorama • The Champions Update, along with Whipped and Steamy • Cosplay Café at a couple other events in Portugal as well! The idea was to collect feedback and further data that would let us wrap up Colossorama’s development neatly, taking notes of what should be tweaked, typos to be corrected, and which challenges still needed to be balanced.

In the end, we took notice of several small rough-corners, and even had to chance to tackle a few changes between the days of both events. The final high-score for the main Colossorama mode was 171 heads, meaning the overall experience of the game is much more balanced compared to previous versions of the game! Of course, some people also gave a try at other newly tweaked challenges such as Party, Trickster and 1-Hit Wonder.

Aside from just showing our games, we had the experience to live through what so many others in the industry do, by setting up our own booths for our own the first time! Planning, printing, purchasing materials, etc. Overall, it was still a very rewarding experience that also gave us the opportunity to socialize and network!

Whipped and Not So Steamy? What would you like to see?

As for Whipped and Steamy • Cosplay Café, things have been a bit different from what you are probably expecting. While Cosplay Café was also shown at events together with Colossorama – and got some very interesting reactions while at it – and at our talk at Game Dev Camp at the present moment, further developments with Whipped and Steamy are frozen in place until we conclude Colossorama • The Champion Update’s development. We really want to focus that specific update so we can advance with future WAG plans, including those related to Whipped and Steamy.

A few months ago, we released a collaboration with an adult-project, and we have been considering different avenues regarding what we want to do with Cosplay Café or other similar projects in the same vein. Some of these avenues include updating Cosplay Café including more refined gameplay and more characters to designing completely new mature or adult-oriented games. There’s really a lot of paths we can go down through, and we’ll be conducting several polls in different sites to gather feedback on what people would like to see!

A Fishnet of Assortments!

Like we mentioned at the beginning of this report, there’s an assortment of things that have happened satellite to all the event preparations, decisions we’ve been making with our games and there’s been a lot going on with our Discord community as well. Here’s some highlights:

And that’s just some of the highlights! Honestly, there’s been so much stuff that has happened since our latest report that its hard to keep track of everything that has happened! We believe that rounds up things nicely though. 😊

That nails it for this time around! We talked about so many things here, yet there’s always more we want to have around coming 2020! Things are shaping up quickly, so you may want to follow us on Twitter and Facebook to stay informed about more and other future announcements!

Alternatively, you could get informed or hang out with us at our Discord server! Not only can you meet some of the artists we mentioned before, but also engage in more Whales And Games talk, gaming discussion and much more! Dive in and say hello! Cheers! 🐳