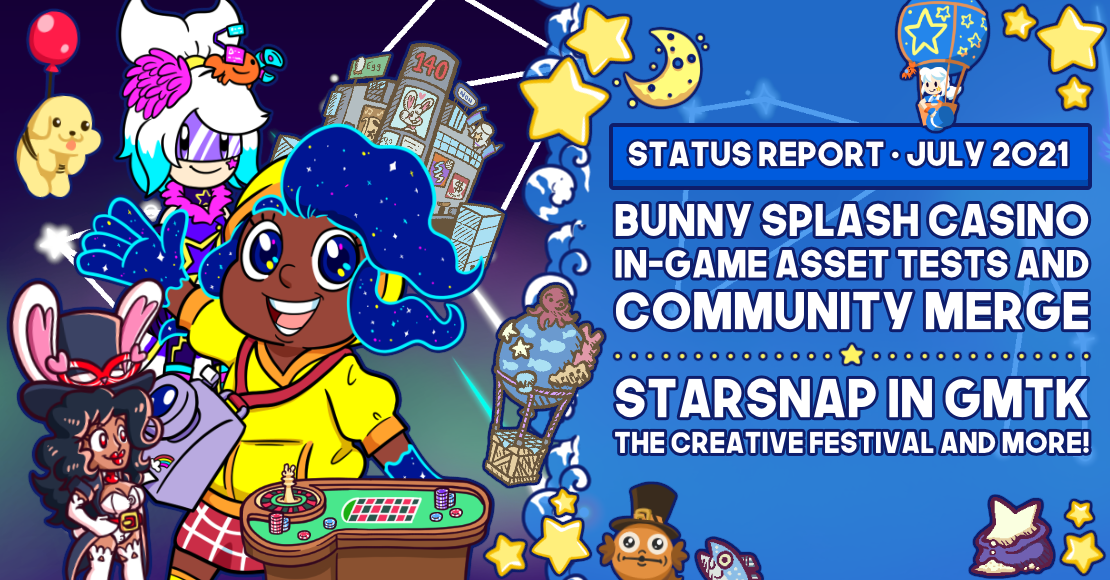 Ahoy there! ☀️ It’s been July for a while now, and you’re likely wondering what’s been going on behind the scenes since our June Status Report!

Well then, you’re in for a treat! These past weeks have again been full of project advancements, and that means it’s time for a new status report!

This month, we’ve advanced on Bunny Splash Casino’s development with some in-game assets and some art tests. We’ve also merged the split Bunny Splash Casino community back to our main Whales And Games Discord Server. During the GMTK Game Jam we also made a new game with Starsnap, the new additions to Townseek are looking great, and the art front has also been very busy!

Let’s set sail, for we’re going full speed ahead! We’ve got so much to cover! ⛵

Rather than doing a key-artwork like the strip outside just yet; we’re instead focused on testing the art style for in-game assets for the casino! 🐇

For most of the game, the majority of the choices you make will be centred around the casino, with its interior in view! You see it while placing games and activities in the world during the Management phase; while you’re placing customers and hosts during the Action phase and of course, as the background of the Conversation segments!

At this time, all the assets shown above are still a work-in-progress. It’s very likely that the scale of objects, characters and menus will change. While we want to have quality assets to show soon, we want to make sure we get them right first!

Over the next weeks, we’ll continue working on these assets and test out how they look at different resolutions and sizes. Our goal continues to be to make Bunny Splash Casino a very visually-striking game, and that’s what we’re aiming for! 💪

In our previous reports, we’ve talked about how we were planning to return to social media with Bunny Splash Casino. We’ve finally gone ahead with it, though in a much more major way than we originally intended!

When we originally conceived Bunny Splash Casino, we created a whole new Discord server just for it, split from our main Whales And Games community. As circumstances have since changed, and as our main server has continued growing, we’ve considered that said split is no longer necessary!

As such, we’ve merged the main channels from our old-dedicated server to the main Whales And Games server, having a room for general talk, suggestions and creative works! You must be a legal adult to be able to opt-in into these rooms, and they won’t show by default when you first arrive at the server.

The same merge also applies to several of our other accounts, though we’ll leave the exact details for later. Beyond Discord, our other main channel for Bunny Splash Casino is our Twitter account, now at BunnySplashGame!

In Starsnap, you photograph shooting stars to stop them on their tracks, connect them to create constellations and place them back in the night sky! Repeat a few times, photograph background elements, and you’ll end up with your one-of-a-kind skyline!

With this game jam, we decided to take a more mechanic-oriented approach to the design of the game. Once we arrived at the idea of connecting stars, the mechanic struck a creative cord with us! As such, we decided to focus on polishing it as much as possible during the jam. To give it the extra Whales And Games charm, we created Astra as a mascot for it, appearing in the opening story segment!

Result-wise, Starsnap did fantastically! We scored 6th place in Presentation and 34th Overall from a poll of over 5,000 entries! In fact, we even appeared in Mark’s video featuring his picks for the top-20 games! However, we were not one of the top-20 games, but rather, we were used as a segway into one of them. Oh well, there’s always next time! 😅

After we got our results from the jam, we released a small update to the game titled The Constellation Namer Update. This update added several quality of life tweaks and the ability to rename constellations, which was heavily requested during the jam!

Beside Starsnap, we’ve also got another huge set of headlines of this past month’s Treasure Projects and what we’ve got heading forward! Remember that everything here, and any dates we announce, are extremely volatile! 👇

Our long standing back-log of side-tasks keeps getting smaller! With some long-pending tasks finally taken care of, we can’t wait for more of what’s ahead! 👍

Finishing off, we’ve got our Whales of Culture recommendations from our team for the month! 🐳

As you might expect from us by now, we’ve got company misfits; chill store-simulation games; over-joyful fun with Whales And Games characters and nordic-god time-travelling shenanigans. Let’s tune-in and see our picks! 📺

Jorge
Looking to get some recommendations of what to watch, I asked Twitter for suggestions. One of them was The IT Crowd, a british humour series about two IT employees at the basement of their company; and their newly appointed supervisor with no computer experience at all. The setup already sounded great, and after the first episodes, it became a hilarious ride full of charismatic british humour. Weeks later, and I’m still quoting moments from the show. A fantastic hidden gem, just like a fire at a sea park!

On the game front, in the early days of Steam, there was a shop-management game called Recettear. Mix-it up with Zelda-style dungeon-crawling and improved shop management, and you’ve got Moonlighter! With an addicting loop, Moonlighter has you defeating enemies through dungeons and collecting their artefacts. You can then sell your spoils for profit to further improve your gear for dungeons. Rinse-and-repeat and you’ve got a fun, twitchy formula!

Moski
Miitopia, the roleplaying game where you design your protagonist and the whole cast, scratched my itch for a mindless fun game. My playthrough involved characters from the Whales and Games’ universe, and it was a hilarious riot from start to finish. Simple in mechanics and not too exciting, but still a millennial-humour driven story that’s difficult not to smile at.

My second recommendation is Loki. While it’s on the short side with only 6 episodes, it went to great lengths to deconstruct Marvel’s approach to story-telling. It focused on character development over grandiose action scenes by playing to the charismatic strengths of Tom Hiddleston, the scene-stealing actor of the titular character. His exploits awe, inspire and, fittingly, marvel.

With Bunny Splash Casino continuing to take shape, the community merger, and some big Treasure Projects tasks out of the way, we’re paving the way for an even bigger and striking community and sets of games! We’re very excited about what the rest of July and August will bring!

As the Creative Festival marks one of the most active periods in our community, we’d love to have you join our Discord community server! Alternatively, you can always follow us over at our Twitter or Instagram for screenshot saturday and more! And of course, there’s also the Bunny Splash Casino Twitter if you’re into its themes!

At some point during August, we’re likely to take some time off to sit back and catch-up on our own end! Other than that, don’t forget to reserve your Steam Deck in advance. We’ve already got one in our sights. Cheers! 🐳

PrevTechno and Gears! Join Moski in this year’s Art Fight!
The duel is back with Art Fight Duel Cybersteam!Next