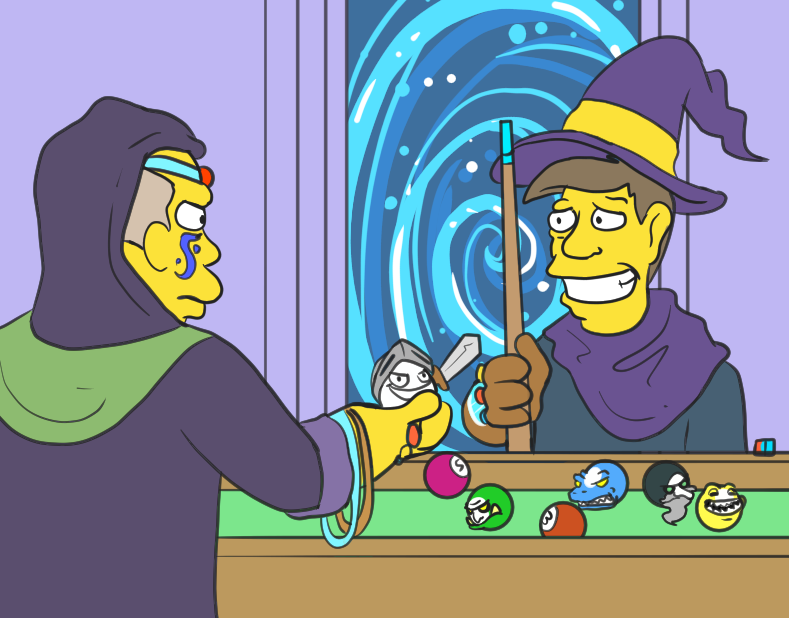 A Knight in a Wizard’s Snooker Game

D’oh no, I said Wizsnooks. That’s how I call Wizard Snooker.

So you call it Wizsnooks despite the fact this is obviously a knight.

Okay, this is time for a more abstract post. We’ve made some posts before about Wizsnooks, our roguelike loot plundering pool hybrid, but we haven’t touched the idea of the setting yet. That we waited too long to get to it reflects how it happened in the development cycle: We pretty much left the title and setting development to the end.

On the first night, we brainstormed like crazy, with the idea of a pool game with enemies and loot being the outstanding one. With that in mind, I made the cue ball, a sword, the enemies, and we went from there. The first weapons were all swords.

During the last day, I had the duty to make the logo of the game. The problem was that we still had no name for it. The brainstorming began shortly, with names like Medieballs (because of the setting of fantasy enemies and weapons). To add more flavor to the game, I was asked to make some hands for the cue ball, with armored gloves to further reflect the setting of the game. However, Robin told me that, since the hit sounds were lightning bolts, it’d make more sense if the hands were wizard gloves instead.

That’s when it hit us: The actual setting of the game. Our game would be about wizards meeting at a tavern to play a magical game of pool. Hence, the fire pits, enemies and loot. It sounded fantastic. But we still needed a name. We actually ended up with a lot of them. Here’s a list, including some that didn’t even have anything to do with wizards:

The list is… not complete. There’s many variations and even some that didn’t have to do with wizards at all. The story of this development is not necessarily complete. But one way or another, we finally had a name.

That pretty much covers up the story behind the name. I quickly made up more things like wizard hats, more variety of weapons, and so on. There wasn’t much time left to go full wizard, but we still managed.

It this read got you interested in, Wizsnooks, click here to play! It’s available on your browser and downloadable for Windows, Mac and Linux. If you want to chat, this Discord server is where it’s at. And last but not least, here’s the Whales and Games Twitter, so you can keep in contact with us.