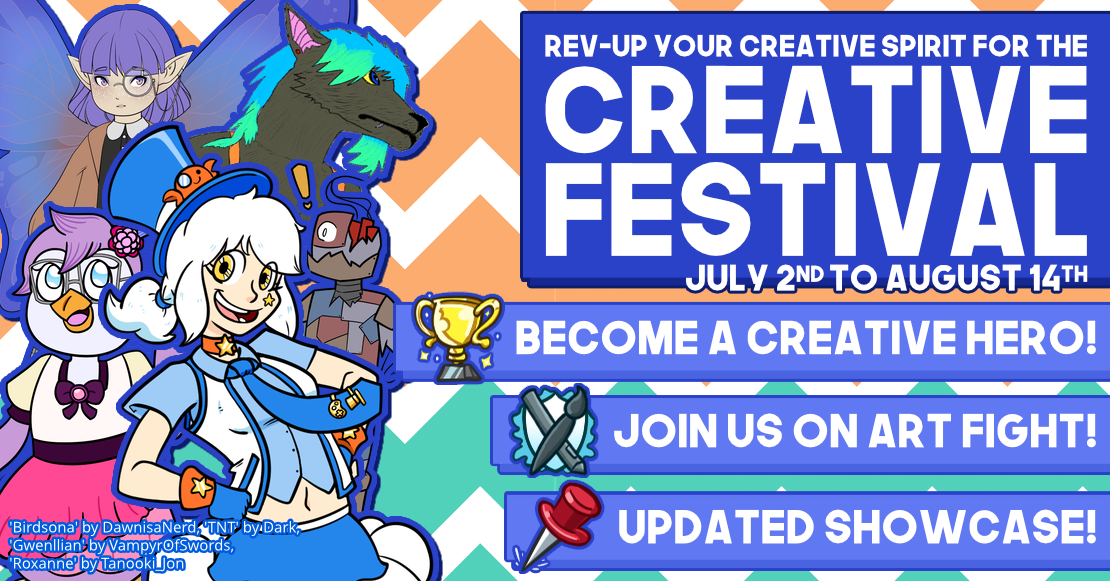 Become a Creative Hero during the ‘Creative Festival’!

Have you been keeping your creative spirit in check? Because it’s time for the Creative Festival, our brand-new Whales And Games Discord server event, completely dedicated to the

category of the server! And it’s going to be our longest-running one yet, taking place all-the-way from July 2nd to the 14th August! That’s a month-and-a-half!

From us and half of the server’s members participating in this years #art-fight, to a point leaderboard where you strive to be a creative hero, it’s the ideal time to get crafty if you haven’t tried any sort of creative activity before! Here’s a full breakdown of what this event entails!

For the duration of the Creative Festival, each day you post something you’ve finished or a work-in-progress piece in one of the

channels (#art-fight, #creative-showcase, #wips-and-discussion and #gamedev), you’ll be awarded a point. Post again the next day and get another point. Keep posting daily and they’ll start stacking!

During the event, the Members List will be split into roles of 1, 5, 10, 15, 20 points as well as one dedicated to the highest-score. Those of you who score at least 1 point, get a permanent ‘Creative Initiator’ role. Beyond that, while the 5, 10 and 15 roles are temporary to the event, shall you reach 20 points, you’ll also get to keep a permanent ‘Creative Hero’ role! That’s two permanent event roles in one!

B-B-But! It doesn’t end there! The member with the highest-score of the event also gets to keep an unique ‘Creative Champion 2020’ role! And, it has the perk that the champion can pick their own custom role colour that lasts until next year’s event!

For this edition of the event, points and roles will be attributed manually. We will be checking for posts on these channels and attributing points at 12AM UTC every night! You can check the current standings and who’s leading the leaderboard on the #festival-leaderboard room!

Conveniently, we have also decided to host this event right alongside Art Fight (although we are completely unaffiliated)! For those that are not familiar with the event, Art Fight is a month-long yearly online art-trading game where players are split into two teams.

By drawing original characters (OCs) belonging to players on the opposing team, you score points towards your own team! And they can do the same thing for your characters too to score for theirs! It’s basically gamified art-trading!

Moski is also participating this year again with our Whales And Games and Bunny Copulation characters and we will be striving for Team Spice! We’ll be adding new characters and reference sheets over the course of the event, also keep a lookout for us to share some of our own attacks and defences!

For the duration of the Creative Festival, we will be hosting a special #art-fight room so you can show us some of your favourite characters, attacks you’ve made and defences you’ve received! You can also find a list of server members participating in the Pins

of the channel so make sure to link yours too!

And, to keep the competitive spirit flaming even while on this server, we also made roles to go alongside the Art Fight teams! On the Pins

of the #art-fight channel, you’ll also find a message that allows you to pick your own team!

In addition to all the event-specific shenanigans going on, we have also updated our #Creative Showcase page to feature the Pins

from January to July of both #creative-showcase and #wips-and-discussion. This expands the featured gallery from 41 pieces to 82 pieces that have been pinned in these channels in the past!

You might have also noticed that #creative-progress has also become #wips-and-discussion. We thought this made it more clear that the channel was dedicated not only to sharing work-in-progress pieces, but also the ideal space for creative discussion if you want to share tutorials, tablet talk, and more!

And that’s just the beginning of the festival! Over the course of the next few weeks we will also be showcasing our new character sheets and designs. We want to bring to the spotlight characters of the Whaleverse that never really got much of a chance to shine, and there’s a ton more we want to do with them that are in the works!

Get your tool belt ready, get well-seated (unless you have a standing desk) and ready up for a competition-fueled festival and fight! And keep an eye out, because things are only getting heated from here on out!