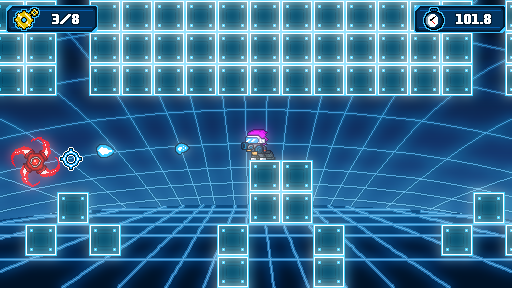 It’s been a full month since we released Hyper Holomayhem 37. With the holidays and university finals, we found little to no time to actually give our experience with Ludum Dare 37 the proper conclusion it deserved. But alas, some free time to be able to write and share with you the highs and lows of the development process of our second time on the rodeo!

Hyper Holomayhem 37 is a side-scroller platformer shooter where, as a jetpacker trainee, you must stay for as long as possible in the Hyperdeck, a room that’s constantly changing layouts as you power it up with gears. Gameplay is based around collecting the gears spread throughout the level which you must bring back to the room’s core under a time limit. Enemies chase you around, and you will have break the blocks in order to get to some gears you wish to collect. Once the time is over, your training is complete.

Our development team was composed of three game developers, each of us with a different area of expertise. Jorge returned again as the gameplay programmer and Moski once again fulfilled his role as the game’s artist, exactly as it had previously been the case with our Ludum Dare 36 game, Colossorama. However, this time around we also had the opportunity of having Zak as the game’s audio composer (which you can read more about below).

Keeping with the pace from last time, we decided to stick with the usual tools for Hyper Holomayhem 37’s Development. The game’s uses Unity as it’s game engine with gameplay programmed in C#. Krita was yet again used for producing the game’s art and Zak used FL-Studio for making everything from the Music to Sound Effects.

After the jam’s theme (One Room) was announced, there were several ideas that were placed on the table as potential concepts that we could develop during the event. From all of those ideas, we decided to pick the concept of having an holographic room constantly changing layouts, now deemed in game as the Hyperdeck. Other ideas and concepts included impossible room puzzles and even an Fingered-esque game about room decoration.

The Hyperdeck idea was picked as the chosen idea not only due to the time limit we had to develop the game, but also to allow the game to have extra replayability value which is greatly enhanced in this concept thanks to the ever changing room layouts.

As progress on the game continued during the following days, we decided that we would focus on the game’s airborne platforming, as well as environmental destruction the player could make by destroying the blocks that made up the room’s layouts. These elements were then further expanded on with enemies, extra traps and even power-ups, all of them placed on the rooms at random, which also helped strengthen the game’s loop, even if several ideas had to be left on paper due to time constraints.

One of the aspects that Hyper Holomayhem 37 was mostly praised on was the game’s overall polish. Although we had to make some cuts when it came to the gameplay, we made sure that game still felt complete and solid, as well as progressively let friends playtest the game in order to assure that no issue went unnoticed.

One of the reasons why we favor polishing overall is to allow each player to feel like they’re interacting with a vertical slice of a potential game. This allows them to always know what to expect in case they come back, either on their own or due to an update.

Once the game’s development was put up to speed, task division and scheduling was efficiently put into the place. We paced what needed to be done as we went through the days, and based on what content we knew we would be able to have in the game by the deadline. Same as last time, this allowed the submission hour to be fully dedicated to that for that alone, and based on requests from last time, we also provided a WebGL version right from the beginning.

One of the things that we felt could have been better explored in Colossorama was the game’s audio. Last time, we were only able to find someone that could give us a hand on composing original tracks a few weeks after the game’s release and update. by that time, the great majority of potential players and Ludum Dare participants had already played the game.

However, with Hyper Holomayhem 37 we were able to find someone who was eager to give us a hand with the audio composing, Zak. Having someone doing and composing audio on the team helped us give the game a set of unique sounds and a great music track to boot, making the game more unique, and distinctive when it came to audio.

What could have gone better?

As mentioned above, several ideas were outlined right after the theme was announced. The final concept for Hyper Holomayhem 37 was only decided a few hours after the theme announced, which slightly delayed works.

Nonetheless, even after the final idea was picked, there was a period of uncertainty regarding what exactly made our concept unique and what exactly would be the game’s core loop. At the time this loop was only the player going around collecting the gears and bringing them back to the core. This eventually lead to multiple, overthought discussions about implementing features like puzzles, etc.

This uncertainty caused some delays, however, we then realized that the base loop we already had just needed to be spiced up, as collecting gears and destroying the room’s blocks was already engaging by itself, and playtesting helped confirm this fact. We then proceeded to add extra content to further solidify this game loop.

Despite having settled with our game loop, there was still a lot of content that had to be cut due to the time constraints, some of which caused by the delays of the concept’s uncertainty. Although each of us knew which tasks needed to be taken care off, and what schedule to follow, we believe we could have better explored the game’s concept, as well as added a lot more content into the game. One example of a game’s concept that was not fully explored, and caused us to have a not-so-good score when it came to the theme, was how the Hyperdeck represented a single room.

Some of this content that was unable to be included in the game included more types of enemies, power-ups and even completely changing the room’s aesthetic as the player completed layouts. We still hope to get back to these ideas in a future update.

Even if the game’s development was filled with mixed feelings, we’re still happy and glad of the final results, dazzled by how well the game scored, getting a 51st place in Jam Overall.

As a short summary from everything above as well as our notes advice both to you and for future projects:

Feedback is the greatest thing a developer can get, and we’re glad that we’ve been able to constantly receive it. Hyper Holomayhem 37 was yet another great game we enjoyed developing, even given the hiccups, and we’re full of ideas on how to improve it, as well as for brand new projects we hope to do soon!

Thanks a lot for reading! As always, even if post mortems are mostly for self-reflection, we have the optimism that those who read these always learn something from them. We’re really glad of our results and the feedback we’ve collected during Ludum Dare, and it’s all thanks to you, the wonderful jammer community.

Our hands are completely full with assignments, commissions and other projects we must get done under a tight time frame, but we hope we are able to come back with some new stuff to show soon, as well as give Hyper Holomayhem a brand new coat of paint and bring it to the same level of content as Colossorama. It’s probably going to take a while, but it’s something we want to do as soon as we can!

If you wish to keep up with what we’ve been doing, you can follow us at @JorgeGameDev and @The_Moski as well as @Zakblystone, which was a honor having as a guest to help compose the game’s audio.

Thanks a lot! Until next time! And don’t forget to try out Hyper Holomayhem 37 if you still haven’t given it a go already!