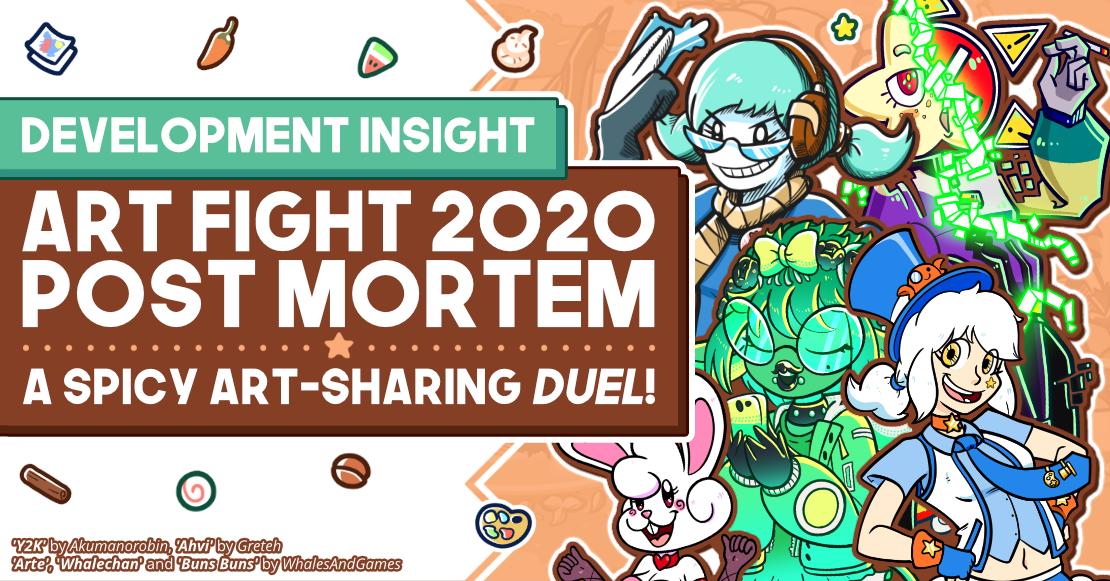 Hey there! It’s hard to believe that this year passed so fast that we have already participated in an Art Fight event again!

Just like last year, we want to offer some artist insight, and since I, Moski, am the lead artist that’s in charge of the art-side of things around here. I’ll be telling you all about Whales And Games’ participation in Art Fight 2020!

In last year’s post-mortem, we explained what the Art Fight event is, our reasoning to participate and our overall experience taking part in it. But things changed a lot with Whales And Games since last year, which in turn affected how spicy things got this past July! Let’s get into it and see, shall we?

Starting from the top and recapping from last year, Art Fight is an event where artists get selected into one of two different teams, submit their own original characters and score points for their team by drawing characters belonging to artists from the rival team. It’s two teams drawing characters from each other for a whole month, which results in one of the most wholesome art-trading wars that you can participate in on the internet!

This time around, since we wanted to take the opportunity to wrap up some of the ideas from Whales And Games and Bunny Copulation, we decided to participate in the event by updating our character sheets as well as creating some new ones for characters from both brands. I also wanted to improve my skill on my new drawing program of choice, Clip Studio Paint, which I had recently switched to from Krita for both promotional and game artwork.

At some point, we thought about a twist to wrap up the event and, well, things went off the rails in the best way possible, merging both our artwork and game development prowess together!

In this year’s edition of Art Fight, the teams to choose from were between Sugar and Spice. I opted to draw under the flag of Spice out of preference, and, before I knew it, I was creating art left and right!

For Art Fight 2020, we wanted to update a lot of our characters to properly reflect how we’ve evolved since our first participation. Last year, we had plenty of sheets for people to draw built from previous promotional and game art, but we hid them all at the beginning of the event to make new versions of them.

These new versions, featuring completely original new art created just for these sheets, took a lot longer than expected, eating away the first two weeks of the event. However, despite the delay, they allowed us to introduce some brand new and freshened up designs for several of our mascot characters! Whalechan and Dapperchan are now officially looking nicer and dapper than ever!

Once we finished the character sheets, it was finally time for me to create some awesome art. Since we needed to make up for the time lost, we decided to start strong, picking characters from pending revenges from last year and bookmarks (found by randomly hopping around users) that we thought looked striking. My first piece of art featured an animated background, and as soon as we uploaded the attack, we started getting attacked as well, which was great! We liked the final result of the first attack so much, we made it a goal to animate every attack from there on out.

Halfway through the event, we had finished 6 attacks. We roughly had around 15 by the same time in the previous year. I originally intended to continue making standalone artwork until we were done, but then, we had a wild idea.

As we were midway through the event, we conceptualized an actual playable card game based on Art Fight. Art Fight Duel, with a pitch document written and all.

I didn’t sleep that night. It was just the perfect mix of, well, everything! We’re game developers and artists, it was a game that involved both Art and Fighting, it could feature over a dozen artists, put some of our own characters into a new game, and it could be just the thing we needed to reignite our game development spirit!

From the moment we had the concept down, we decided to make the game rather than to continue making artwork for several reasons:

The execution of the development didn’t go flawlessly, but the result speaks for itself. By spending every single day of what was left of the event in developing the game, we managed to feature 20 artists, with animated sprites for all the 24 featured characters. We took heavily into consideration their designs and bios when creating their sprites, attacks and stats.

We submitted the first version of the game in the last two minutes before Art Fight was over. No stress! After the event, we spent some extra weeks tweaking and adding in audio, a proper title screen and our usual settings and credits, bringing the game right up to our jam-standard!

We wrapped up Art Fight, and I was finally convinced that switching from one drawing program (Krita) to another (Clip Studio Paint) was the best thing to do at this point in my artist career.

While I didn’t learn as much as last year, I still tried to innovate in my style in some aspects:

Beyond Art into Game Development!

Beyond the standalone artworks, Art Fight Duel represented equal opportunities to learn differently. It helped me understand things I could do better on Krita before, like the character sprites and the use of mirroring tools. However, I did end up using pretty much the same techniques for the duration of the development, as there were not as many opportunities to try new styles.

Aside from its artistic point of view, there are some takeaways to explore too when it comes to the development of the game. While we had previously discussed considering making a game for Art Fight, it didn’t become a serious consideration until late into the event. Yet, once we got started, we couldn’t stop.

We did as much good to Art Fight Duel as it did to us. It had been a long time since we last made a short self-contained game, and it felt fresh to go back to that. We chose a genre we have never challenged and went with mechanics we had never used. Since Art Fight is an endless ocean of characters, designs and concepts, we rarely had troubles in finding any particular thing that could fit any of our design’s needs.

As a result, Art Fight Duel became one of our most ambitious games, mixing strategy, fast-based mechanics, a distinctive style, and plenty of cards. Plenty of the people who had their character featured in the game have been pleasantly surprised. Given the circumstances, we’d say that the game was quite popular among the social circle it was made for, and it has plenty of opportunities to grow!

However, since it had been a while since we last developed a short self-contained game, we heavily under-estimated the implementation of some features. As a result, we had to spend some extra weeks following the end of Art Fight implementing quality-of-life inclusions such as settings and audio without otherwise would make the game feel lackluster.

With us participating in Ludum Dare 47 in the coming week, and with Bunny Splash Casino resuming development, it’s important we take these short-comings into consideration, and make sure we prepare in advance. For example, features such as re-usable settings menus can be prepared ahead of time of the event to avoid spending precious jam time adding basic quality-of-life features.

Spending so long in making character sheets and changing gears from making artwork to making a game jeopardized our opportunity to receive cool artwork a bit, and ended up receiving less artwork than last year. However, the game was fantastically received to the point that it even got featured!

Aside from that, and just like last year, there are still numerical results we’d like to evaluate, and which help us gauge our participation and performance in the event:

While the experience overall was fantastic, Art Fight occurred in a very tumultuous moment for us. At times, it was difficult to grasp that the expectations and the reality didn’t match up perfectly. However, it was also proof that some of the best things in life are not really planned, and that even when plans don’t match expectations, one can have a great time.

Last year, I came to the conclusion that I really enjoyed drawing characters. And I still do, perhaps even more, but the experience came around with the idea that I’ve also got to grow in maturity. The novelty of having this brand-new event was gone, and we needed to up the ante. This resulted in us participating in the event as if it was a self-imposed opportunity, and wanting to make the most out of it across character sheets, thumbnails, animation and even a game. Rather than treating Art Fight as a leisure, as we probably should have, we ended up feeling fatigued as the days went by.

However, doing art leisurely or for the sake of improvement are not necessarily contradictory statements. The saying says “find a job you enjoy doing, and you will never have to work a day in your life”. I’d say that’s partially true, but one has to also cope with things like health and fatigue, and adjust accordingly. But even when things go dire, I really do like drawing. I may be older than the average participant and have been doing art since my teens, but drawing fun, interesting characters is still part of my DNA.

Applying my artistic skills to make an actual game really opened up the possibilities of what I, and we can do during Art Fight. Regardless of making regular artwork, animations or even games, it’s important to play to one’s strengths at times, but also to take risks in others. I don’t feel so bad about having missed out on doing more character artwork when I see that people really enjoyed playing the game.

We have evaluated the possibility of making it a tradition to update Art Fight Duel every year, with new mechanics, adding content to match the new themes, and, of course, even more characters from more artists! We still need to make more character sheets, and, if things go right, we’ll be plenty busy with Bunny Splash Casino alongside it. For now, we’ll wait and see, but it’d be a fantastic time to update it going forward!

For the time being, I’ve got a whole year ahead of me to further polish my skills so that, if I do join Art Fight next year, I am even better than I was this year! Even if fatigue or personal worries get in the way, I still see myself creating artwork for the foreseeable future and I’ll do my best to enjoy it.

That will be something to look forward to! For now however, we have to prepare for Ludum Dare 47, and the challenges our new commercial projects bring us! Thank you for reading and I hope you join us along for the ride! Cheers! 🐳