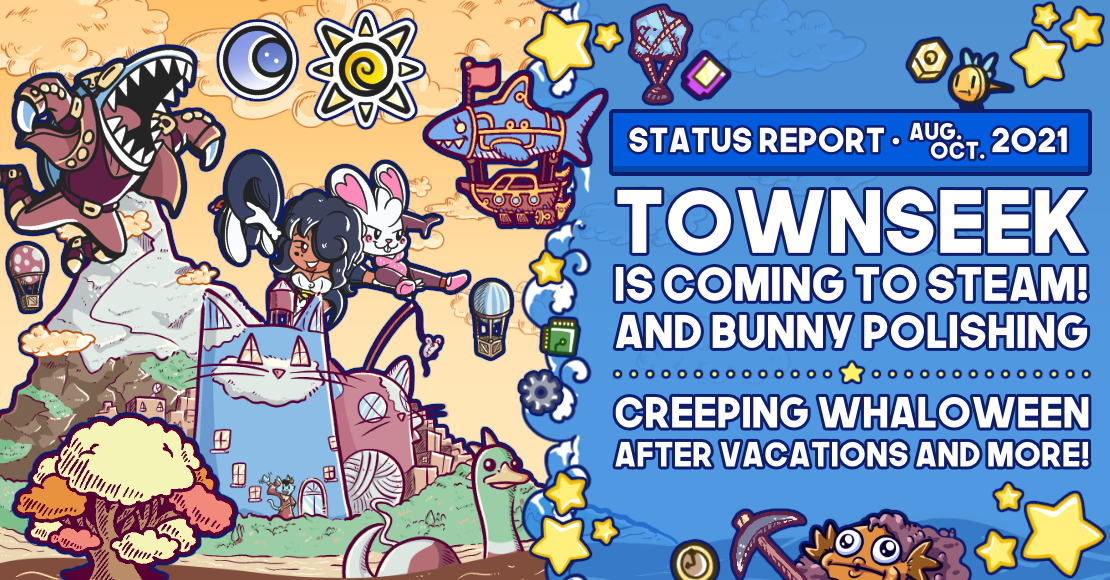 Hey there! 👋 We’ve been riding the tides of change for quite a while now, and before we knew it, we’ve gotten to October already. Whaloween is right around the corner! Time just keeps on sprinting, doesn’t it? 🎃

If you were wondering why we haven’t had a Status Report since July, it’s been because we’ve been quite busy! There’ve been a lot of incredible studio milestones that we’ve been going through. Some things took some considerable time, so we didn’t really have time to write this post properly until now! But we believe you’re going to like the news, so let us give you a full report of on-goings!

When we came back from our first official vacation in August, we released Townseek’s Star-Seeker Update and subsequently announced that it’ll be getting a full version and release on Steam! Bunny Splash Casino also continues being developed steadily as we continue working on game systems, detailing the casino, and sketching future scenes. In the Treasure Projects department, we’ve released Art Fight Duel before going on vacation and our Whaloween event is coming really soon! And of course, we’ve got our healthy dose of recommendations at the end to close it all off!

All hands on deck now, for this is going to be a wild ride! 🌊

In the Voyage Journal section of these Status Reports, we talk about the progress that we’ve been making for our commercial games. Starting with this October edition, with the announcement that Townseek is getting a full version, we will be having two Voyage Journal sections one for Townseek and one for Bunny Splash Casino, every-time that each respective games has news! ✨

We have previously talked about how we were developing a new update to Townseek entitled The Star-Seeker Update. We finally had the chance to release it this month and the game has been updated with lots of new things to do! ⛏️

There’s a new town, Vushkaar, with its new host, Mjolnette, and new items to collect! You can buy a pickaxe and seek brand-new mining locations for minerals and artifacts! You can also mine fallen shooting stars and use its stardust for speed boosts to help you travel faster! And of course, there are tons of bug fixes and quality of life improvements too!

The current version of the game has also been renamed to Townseek Jam Version. That we way, we can clearly distinguish that it serves as a proof of concept of what the full version will become. You can play this new update over at our itch.io page!

Speaking of the full version, that’s exactly our big news! Townseek is getting a full version that we’ll be releasing on Steam! There are a lot of new features we want to include in this version, including a new colourful art direction; a new main quest featuring the journal of Sir Reginald Sharkington; new-side activities such as farming and digging for treasure; and of course, several new towns and townspeople to seek!

At this time, we’re currently working on blocking out the game map and starting to detail the first areas. We’ve had the chance to experiment with our new art direction by designing a continent that hosts the town of Burrowburg and their adorable bunny inhabitants! Our end goal is to take the same soothing and curiosity-inducing feeling of the previous sepia-style map; and translate it to the brand new colourful art direction. Using this new art direction, we hope to give more charisma to each individual location!

Speaking of locations, in the Jam Version, landmarks were independent points of interest, like a big character or some interesting monument spread across the map. In the full version, however, we want to have groups of landmarks that are part of larger zones all-together. One of these new landmark areas we’re currently working on is the Golden Forest, an area filled with autumn and maple coloured trees, but which is also host to its own smaller landmarks like a Beehive Colony. This way, the areas will feel more thematic and cohesive, making the map more memorable. 🐝

In future Status Reports, we hope to share some more insight on how some of our game mechanics are going to come together. In the Jam Version, towns were mostly trading outputs, where you could sell and buy items to have enough gold to purchase balloons and tools. We want to massively increase the protagonist of towns, and we have some systems designed through which we hope to achieve just that! 👀

For now, make sure to add the game to your wishlist! It really does help us out! ❗

These last months, we’ve been working on giving quality passes to the bits of content that we already have made of the game that we felt weren’t totally polished just yet. Things like the interior of the casino; the Eden Strip key-art we’ve previously shown; the game’s logo; and other pieces of content we haven’t revealed yet; have never looked better! ✨

While we’ve recently had a few weeks of down progress due to some proprietary tasks we had to take care of first, work continues in the game systems. In the Action Phase of the game, one of your main tasks is to pair hosts and customers to tables. While the original implementation had you dragging customers into a bubble that’s shown above the table (shown below), we’re currently reimplementing the mechanic to be more satisfying and less UI heavy.

Additionally, we’ve also started making mock-ups of how we want the narrative to proceed, and have started making some sketches of some scene artworks that happen early in the game! We’ll have more peaks at them over at the game’s Bunny Splash Casino Twitter in the future!

Once we get wrap up what we currently have, we’ll be able to show you some more aspects of the actual gameplay. We want to prioritize it before moving into the other elements, like the Visual Novel aspects. Once we nail all the gameplay down, it’ll make for a great demonstration video! 🐇

Now that Townseek has become a full project in production, these Treasure Project sections are going to get a bit skinnier. Even then, there’s still lots of side projects that we want to make while we’re working on our games!

We’re not sure when we’ll have the chance to participate in another game jam given our reinforced schedule. But we will continue making improvements to our community and structure even if we’re extra busy! 💪

Well then, let’s get into the highlights from these past months! Remember that everything here, and any dates we announce, is extremely volatile if it hasn’t happened yet! 👇

We’ve consumed media like crazy in the past few months! We could easily write a whole post about these, but let’s not get crazy. Instead, we’re keeping the Whales of Culture suggestions limited to two for each of us, like always. 😅

One surprising thing this time around is that we’ve actually read books! And we’ve got book recommendations! Yes, paper-back books! Don’t believe it? Let’s see them then! 📚

I admit that I’ve never played a Castlevania game. Considering Halloween is right around the corner, I should definitely get to it. What I did do though, was watch the Castlevania animated series. A fantastic showcase of western adult animation, the series is not afraid to go into its grotesque, demoniac and religious themes from the original games, and even throw in some more slightly mature scenes. If you’re looking for something compellingly gory to watch during this spooky season, the series is a fantastic time!

For the book department, I’d like to recommend Masters of Doom by David Kushner. The book goes greatly in-depth on the story of the formation of iD, responsible for great early (and recent) computer hits such as Wolfenstein and Doom, covering the friendship and trials of its co-founder’s John Carmack and John Romero and how they came to create the games they are known for. Given the book was originally edited back in 2003, I wonder just how extra thick it would have been if it included all the latest stories from these two!

Weeks after finishing the game, I keep thinking a lot about Psychonauts 2. I don’t say it lightly when I say it’s the most brilliant game I’ve played in a long time. Aside from the great platforming and witty writing, the game makes clever use of a single tragic event to showcase multiple types of trauma. Even in its darker themes, it’s still a blast to hop from world to world in this mind-blowing adventure!

My second recommendation is Creating Character Arcs by K.M. Weiland, a book for writing stories with more compelling characters, which somehow, works as a self-help book too. We engage so much with certain characters because we connect in their development, often not realizing that we go through our own internal battles as well, spending so much time trying to believe lies or trying to get what we want, while more often than not, what we need might be far more important and meaningful.

Well, that should cover it! October has been another great month for us, and we continue to work on updating and creating new content for Townseek and Bunny Splash Casino!

Next month, we hope to be back with regular monthly Status Reports, though it’s possible that more situations like these might happen again in the future!

For now, we’ll be shambling towards this year’s Whaloween event! Prepare your fangs, capes and candy corn, and join us at our Discord server! You can also follow us over on our Twitter or Instagram where we frequently share Screenshot Saturdays of Townseek and to which we’ll also be bringing the Whaloween celebrations to!

Games, events and who knows what else, right? We are very busy whales. We’ll be seeing you in the next blog post! Cheers! 🐳