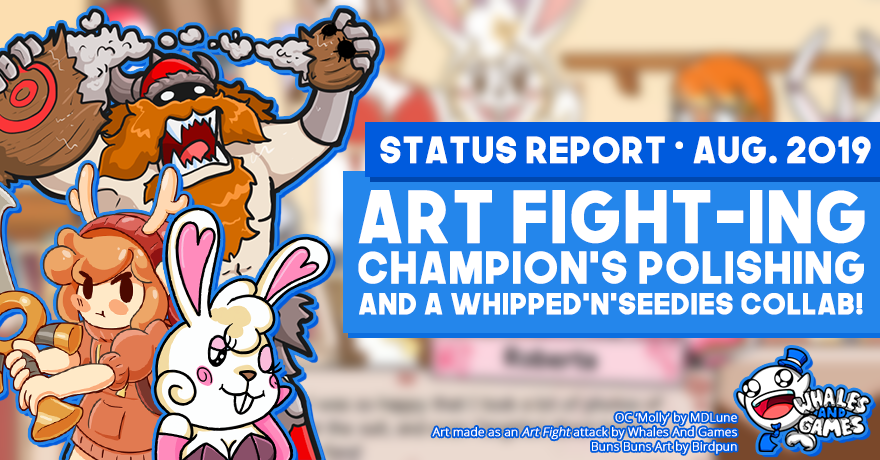 Whale hello there! It’s a brand-new month, isn’t it? And that means it’s time for another Whales And Games status report about what we’ve been up to and what’s next for our in-development games!

In case you’ve missed it, last month we announced we’d start publishing a new status report at the beginning of each month, and this month we have a whole lot to talk about! From a sudden participation on Art Fight, to even more polishing work on Colossorama •The Champions Update to a whole new surprise collaboration around Whipped and Steamy • Cosplay Café, and more! Are you ready to reel in? 🐳

As a bit of a surprise for us, back at the beginning of July a member from our Discord told us about this event happening in July known as Art Fight. In case you haven’t heard about it before, it is a yearly event all about artists drawing each other’s characters, while scoring points for their respective teams! Driven by curiosity, we decided to give a glance at it and it ended up becoming our biggest highlight of the month as we made a bunch of digital art for other artists and received a bunch of new WAG artwork ourselves!

In the picture above you can see some of the attacks (artworks made for other artists) that we’re made by our artist, Moski, during the event. As part of his goal for joining the event, each of the 26 pieces he made feature some twist in their styles here and there, from cartoonish to chibi designs and from pixelart to lineless artwork. And of course, some of us at WAG helped animate a few pieces here and there! 😊

And to our surprise, we got almost double the artwork we received back (we tried to reply back to all of it but we ran out of time 💦)! We’ve received a bunch of new art of Whalechan, Cheqmate, Buns Buns, Jazzy, Bluessom and others! We’ll be looking for a way to showcase them all for everyone to see (as long as each piece’s artist allows us for it)! Meanwhile, the samples above will have to be enough for you to feast your eyes on.

It’s been an extremely art-motivating experience and we (especially the artist) have a lot more thoughts about Art Fight and our experience with it that we want to talk about and discuss publicly. However, for the sake of not stretching this post, we’ll be leaving those for its own post-mortem in the future! Keep an eye out for it!

Blood isn’t the only juice flowing around Colossorama!

Like we discussed last month, we have been working on getting Colossorama • The Champions Update ready for release and have been continuously working on its final touches, adding a final coat of polish to make sure we close off the game for good this time!

What final polish is missing, you ask? Well, we’re currently redoing most of the sounds of the game to make sure they have way more extra oomph than the previous white noise samples, making sure that all of the menus are controller compatible, as well as revising final art assets and gameplay features! We’re also adding a little bit of extra juice here and there to make sure even the smallest stuff stands out and feels great! Here’s a look at our fully-polished Leaderboards for example.

Currently, the Colossorama changelog for this version boasts over six pages of changes, from gameplay tweaks to new features and menus, to visual overhauls and more! We’re also working on playtesting the game together with our feedback committee and we can’t wait to get it into your hands and close off a long pending chapter of Whales And Games! Get ready to slay some heads! ⚔️

While we’re currently focused on working on Colossorama • The Champions Update, it doesn’t mean we have no news about Whipped and Steamy • Cosplay Café! While development has certainly taken a bit of a background note, we’re still very much working on the game and even have a little surprise we’ve cooked on the side for this month!

Recently, we finished all of the main writing for the new character we announced last time, Roberta (Caffie’s Roommate), and we have also started working on the writing of the second somewhat-new character! Likewise, we’ve also worked on implementing and polishing some of the new items and even added brand new item filters (art-pass pending) to the item selection screens, making finding items that target specific cosplayer groups even easier!

And of course, we also have to mention the brand new music track that was composed for the new Support group, which Roberta and the second unannounced character will be a part off! Give it a listen, will you? Its considerably long though, after all, it has all four variations of it in a single track!

As for the side surprise we’ve been cooking, back when we released the game we were invited by the fine folks at Cactus Labs to do a small cross-over collaboration with their also-adult-parody game Draw the Seedies So I Can Has Feedies to add some Whipped and Steamy inspired content to their game’s art assembler! And guess what? That’s coming up next week!

In case you haven’t given a try at the game before, the game is a parody on the age of digital art and being an artist. As you struggle to pay your rent and must take commissions, will you strive to answer only to the safest-of-work ones, or will you go for the extra-spicy requests in exchange for some extra cash? You can pick from multiple preset backgrounds, foregrounds and subjects to assemble art and please your clients. And hey, you can even export some of your finalized art for safe-keeping!

And, as you can expect from this sort of collaboration, there’s a whole new set of backgrounds, foregrounds and character art all themed around Whipped and Steamy (which materials were handled by both our Moski and Cactus Labs’ Birdpun). Some characters from the game might even send you some interesting requests for you to fulfill! Do have extra caution when we release it next week though! There is actual explicit material in this one. 👀

And that’s pretty much a wrap when it comes to art and games this past month! We are extremely excited for our future plans we have in store for Whales And Games. You can still look for more on Colossorama • The Champions Update, the Art Fight post-mortem and our collaboration with Draw the Seedies So I Can Has Feedies throughout this month! You can keep up with the announcements for all of these over here on our Blog, on our Twitter and Facebook!

On a side-note, some of our team members are also going to be casually visiting both Devcom and Gamescom in Cologne, Germany later this month! If you do happen to be visiting any of the events, look out for some people in extremely royal-blue shirts. There’s a very big chance that’s us! 🐳

If visiting events isn’t really your thing, no worries! You can always hang out with us over at our Discord chat! We just had a bunch of artists join us after Art Fight so feel free to join along and showcase some of your stuff as well! Cheers! 👏