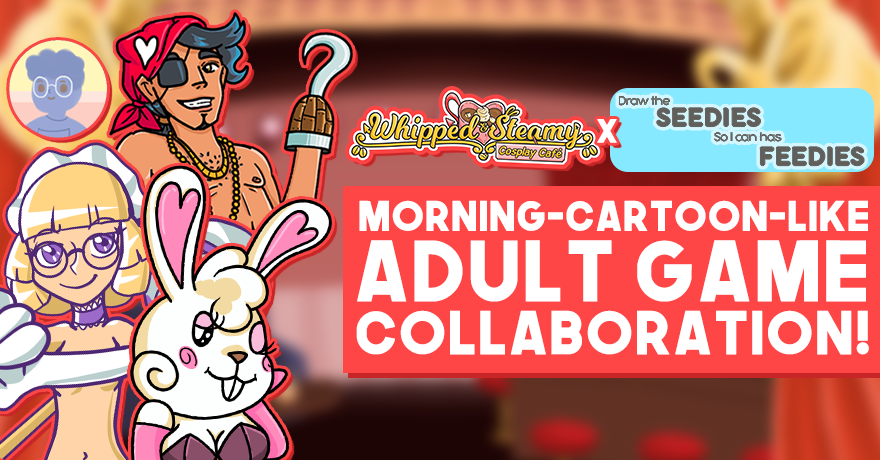 Who doesn’t like a good crossover? Be it in films, videogames or even wrestling, we fans of multimedia enjoy seeing the multimedia become, well, less ‘multi’ and more ‘uni’. So, we at Whales and Games have been wondering, what do we need to be a part of the crossover craze?

Turns out that, together with the collaboration of the creative minds at Cactus Labs, some exotic characters with lots of personality and inversely proportional amount of clothing would do the trick! On our last monthly status report, we talked about a small collaboration between Whipped and Steamy • Cosplay Café – our ero-themed visual novel management sim – and Draw the Seedies So I Can Has Feedies – Cactus Labs’ underpaid-commission-artist sim.

As we go into detail about how this match-made-in-a-sexshop came to be, unlike Cosplay Café which has no-explicit imagery but explicit text, this post (and the game) contains visual and explicit Not Safe For Work content from here on out!

You may be wondering, who is Cactus Labs? Not unlike Whales and Games, they’re a team that also develops games of varied styles, themes and with creative minds. We met all-the-way-back during Ludum Dare 41. While we made and developed Wizsnooks, they created Super Slime Slasher Ultra, a match-3 action game with, well, slimes! We liked the energy of each others’ projects, and have been in contact ever since!

While the possibility of collaboration had always been on our minds, we never expected it to take the shape of a morning-cartoon-crossover-like collaboration between two adult-oriented games, namely Whipped And Steamy • Cosplay Café and their own Draw the Seedies So I Can Has Feedies.

Seedies (for short) is a game where you take the role of a digital artist taking e-mail commissions for things to draw as you struggle to pay off your rent for the month. From there, you are taken to an art assembler where you mix-and-match characters, foregrounds and backgrounds, hoping to achieve a result that meets the expectations of the client who ordered it.

Each day, you can pick between a set of different commissions, but you’ll soon come to realize the different nature between them. Will you strive to answer only to the safest-of-work ones, or will you go for the extra-spicy and lewd requests in exchange for some extra cash? After all, there is a rent that needs to be paid off. 💰

Since both Whipped and Steamy and Seedies are receiving updates, the developing teams talked to each other about the possibility of adding cameos from each group into the other’s game. One thing lead to another, and it became a plan for a full blown collaboration!

On the latest Seedies 2.0.0 and 2.0.1 updates, which you can play right now, you’ll find a lot of new content and improvements to the core game experience (including the ability to export your finalized pieces for safe-keeping)! But wait, there’s more! The update is also packed with backgrounds, foregrounds, characters and commissioners you might have met at Whipped and Steamy! And to sweeten the deal even further, we even helped Cactus Labs porting their game for WebGL so you can get right on with it straight in your browser if you prefer it over a download. Neat!

Will you accept Mop Maid’s outlandish commission requests? What will you pair up with the Bunny Splash Casino background? Will your drawings be Buns Buns approved? Are you ready to feast your eyes on the Cosplay Café characters under much spicier lights? 👀

What are you waiting for? If you’re still here after that last screenshot, it means there’s something in it that interests you! So go on and give the new version of Draw the Seedies So I Can Has Feedies a try! We had a lot of fun bringing everything about it to reality, and we think you’ll have fun assembling the pieces on your own as well! 🐳